This article originally appeared in the California Tech on Tuesday 21 October 2014.

Hong Kong is one of the most vibrant, prosperous cities in the world. Rising to power and prominence under British colonial rule, it was formally handed over to the People's Republic of China in 1997. Despite being part of China, Hong Kong has always enjoyed a privileged administrative status under the One Country, Two Systems model with a substantially different economic structure and a vibrant political life. Hong Kong is ruled by a Chief Executive (something like a governor) elected by an Election Committee of (today) 1200 entities, representing individuals, districts, large business interests and other organizations, and serve up to two consecutive 5 year terms. Not unlike the governing structure of a modern multinational corporation, economic power carries real political power.

In 2007, the then Chief Executive Donald Tsang published the Green Paper on Constitutional Development which was subsequently ratified by the National People's Congress Standing Committee, the relevant governmental body in mainland China. Since the end of British rule there have been only 3 Chief Executives. They preside in a responsive way over the rapidly developing economy and political climate, leading to a much more dynamic constitutional framework than that to which we are accustomed in the USA. This Green Paper was seen as a compromise between mainland China and the Pan-Democratic movement which enjoys the support of about 60% of the population, as it ruled out the possibility of a general election by universal suffrage in 2012, but allowed for the possibility of election of the Chief Executive and Legislative Council (something like the US Senate) by universal suffrage in 2017, then a decade away.

Fast-forward to 2014, and it is now time for the National People's Congress (the Chinese governing assembly) to decide how to implement the recommendations of the Green Paper. To the original wording they added the stipulation that the Election Committee must preselect two or three candidates who 'love the country and love Hong Kong', and that any election by universal suffrage must contain institutional safeguards for this purpose. While all historically elected Chief Executives have been Nonpartisan (pro Beijing), a general election may upset this balance and lead to the legitimization of separatist policies. Beijing worries that this would set a dangerous precedent. The proposed vetting of candidates by >50% approval from the (mostly pro Beijing) Election Committee largely obviates this concern, as does the process by which Beijing must officially appoint the Chief Executive for the duration of their term.

It is thus important to realise that the resulting protests are not pro-democracy in the sense that Beijing is removing pre-existing rights, but that they are punting promised progress on the issue. Hong Kong has never had anything like representative democracy. It is also far from clear that a populist majority government would naturally serve the best interests of the people, who enjoy prosperity borne by the freewheeling economic nature of the city, a prosperity certain to be harmed in any chilling of relations with the mainland.

The resulting protest is not a singular group, but actually involves representatives of four distinct groups. The first participants in the protest were student led groups who announced and executed a weeklong class strike. Comprised of Scholarism, representing secondary school students, and Hong Kong Federation of Students, representing tertiary students, they began their protest by ditching school for a week to really get their point across. Of course, no longer in school, these students sought to occupy public spaces and subsequently had antagonistic encounters with police. While tame by the standards of the Arab Spring or even Occupy Wall Street, the use of pepper spray and tear gas against secondary school students galvanized the movement, leading to the accelerated involvement of the third group, Occupy Central with Love and Peace, a non violent local branch of the Occupy movement. The fourth movement, the pan-democracy camp, is an alliance of the many pro-democracy political factions in Hong Kong. They must be the most patient advocates of democracy in existence.

The student-led groups have stated their goals are

This is not your garden variety protest. International coverage focused on the largely peaceful nature of the protests. To date there has not been a single death, and a relatively tiny fraction of injuries. The protests, which have consisted of disruptive occupation of central arterial streets, have been exceptionally well organized, with guest lectures, homework, decentralized distribution of food, water, clothing, shelter, and the development of mobile medical facilities. Communication has also stepped up - lessons learned during Egypt's short-lived revolution now translate to dedicated apps for encrypted peer-to-peer mesh networks, although many participants' phones were also compromised by phishing attacks distributed by SMS. The protests became known as the Umbrella Movement due to the innovative use of umbrellas to deflect tear gas cannisters. Cannisters, protesters noted, often manufactured in the US.

As usual, mainstream media coverage has downplayed the size of the protests, especially in mainland China, but the protests regularly drew around 100,000 participants, easily occupying several blocks of the city with multi-leveled roads recognizable in the astonishingly prescient film Pacific Rim. Confrontations between police typically escalated to the firing of tear gas and arrests of dozens (but not hundreds) when protesters or police managed (often inadvertently) to surround each other. Arrested protesters have consistently been released soon after detention. As the protest has developed, protesters and police have generally interacted with a great deal of mutual respect, as the politically unaligned police clearly work long hours to keep the peace and have largely eschewed the earlier tactical error of appearing in riot gear and wielding batons. Perhaps the greatest strategic error and outbreak of violence occurred when police unfamiliar with social media were brought in from the mainland and beat up a bunch of school children, all recorded and instantly shared on the internet. This blunder is probably the single greatest contributor to the current detente, especially in contrast with the  overworked Hong Kong police, who have also protected the pro-democracy protesters from violent attacks by pro-business or Triads-linked counter protesters. As of this week, many protesters have returned to school, but still return to the streets in substantial numbers in rapid response to progress or lack thereof during ongoing negotiations. 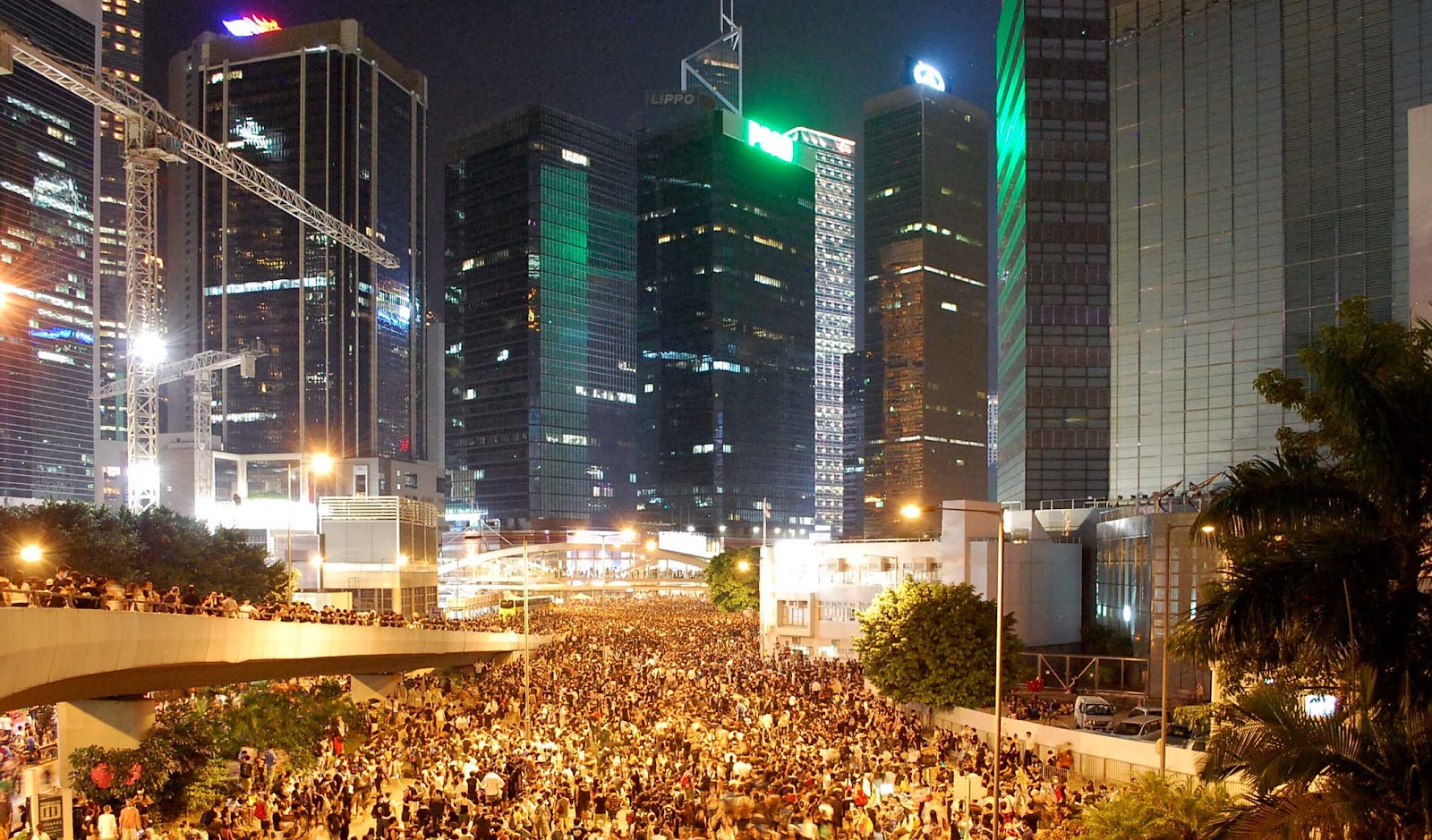 What is the outcome? In many respects the protests have been atypical. Protesting about a proposed political process three years in advance is unprecedented. The key stakeholders, consisting of entrenched business interests aligned with Beijing, as well as a Beijing extremely wary of local movements for separatist or autonomous political innovation, are unlikely to budge. On the other hand, a new generation of youths educated with relatively unfiltered access to the internet and personal communication tools of extreme efficiency have a strong interest in gaining unfettered access to the political process both within Hong Kong and China more generally. Although the state has a jealously guarded monopoly on violence, it is likely that any suppressive response is likely to spawn matching unrest on the mainland, with the possibility of future Tiananmen Square-like trouble. Although the main sources of endemic unrest on the mainland - perceived economic inequality - are less relevant in Hong Kong, the possibility of a forged common cause is likely to lead to some tense meetings in the halls of power. At the least, token concessions carefully measured to avoid encouraging disruptive protest action are none-the-less likely to materialise in order to appease ongoing frustration in the youngest generation.Perhaps the least terrible hypothetical outcome is the eventual formation of a second, lower house of government, a chamber of the people, elected by universal suffrage, to complement a senate-like body of the Election Committee and Legislative Council, where the Chief Executive becomes in essence a powerful Secretary of the Treasury. Meanwhile a Secretary of State elected by the lower house leads the government and bargains hard for Hong Kong's ongoing semi-autonomy and ensures that Hong Kong's continued prosperity is adequately shared. If moves in this general direction are not made officially, it is only a matter of time until app-based consensus gains enough legitimacy to claim a seat at the table of real power, with or without the approval of the existing governance structure.

Posted by Casey Handmer at 5:51 AM