Some years ago, on a long flight to Australia, I first tried to solve the problem of modelling catchments. I'd been aware of this issue since my mid teens, and thought one method might be some kind of fall-line integration to determine the addressable catchment area of any particular point, and extrapolate flow from that.
Full paper: http://arxiv.org/pdf/1606.05224.pdf
Of course, the obvious place to apply this concept was Mars, which might not have traditional multi-scale catchments, so I needed a more robust algorithm. It seems pretty obvious that a pile of water will spread out. Indeed, during the development of this project, I saw this effect first hand when my apartment flooded. Things that spread out with time, or bunch together, can usually be modelled with the diffusion equation, and there I got stuck. Imposition of topography caused my depth parameter to misbehave, losing stability and frequently going negative.
Fast forward a few years and one night I sit bolt upright in bed, I have figured out a way to make this work. The trick is to use the diffusion equation but apply the brakes before it gets out of hand. You don't need to write an algorithm that solves dozens of special cases or does some kind of filtering or any of the usual tricks. You just have to check what water is going where and compare it to how much there already is. Perhaps the blockchain could solve this problem, but I didn't think of it then.
After a few hours of work it was essentially complete. I threw in a maximally simple precipitation model and ran it to equilibrium. I tried a variety of different water depths and precipitation levels, eventually settling on a dataset which showed a broad variety of underlying behaviour.
The central question I wanted to answer was inspired by Kim Stanley Robinson's epic Mars terraforming novels, in which one character casually imagines that the southern region of Mars is poorly drained, like the Canadian shield, and would probably just mostly fill up with water, which would become ice, reflect heat, crash the climate, and use up a lot of Mars' limited water supplies which are more useful at lower altitudes. The southern region is, of course, mostly made of craters. I later discovered that the presence of the high altitude Tharsis massif on the Martian equator basically guarantees a icebox/snowball instability anyway, but our gigantic orbital mirrors will have to be used for something.
If the southern craters filled with water, some may overflow and cut channels through their rims, substantially draining them. If this could be done quickly enough, perhaps the planet wouldn't turn into a snowball of sadness. Fortunately, flow rate and underlying topographic gradient is a pretty good indicator of erosion rate, so I prepared this figure showing the best rapids/waterfalls in bright red. 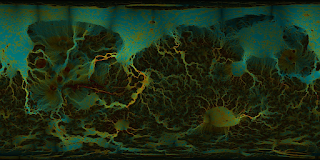 Whoever engineers the greenhouse effect that gets Mars THIS warm and wet can basically have the whole planet - I'm that impressed. Because I was running this in a slow, memory inefficient language, my resolution was fundamentally limited. If anyone is interested, datasets with literally 1000x more pixels are available, I would love to have a poster-quality version of this figure, but don't currently have the time to develop it myself.
My original idea was to zoom in on a region of interest, freeze the boundary conditions, find a higher resolution map, iterate, and then subtract material as though erosion was occurring, and see how drainage patterns shift. Instead, when I checked the high resolution data, I found that the erosion had already occurred. Spooky, I know!
This was super cool, because it meant my model had just become predictive and was potentially publishable. Time will tell in that regard. As far as I can tell, it's the first quantitative speculative hydrology simulation of another planet under a terraforming scenario. Mars is also the only planet where doing this makes sense, because we have both high resolution data and it could (and has) had liquid water on the surface. Titan and perhaps Venus are also possible, but we await laser mapping! And some day, extrasolar planets!
So, rest assured, even though Mars looks like a hydrological disaster, most of it will drain sensibly to one of three oceans or seas, visible in the image above!
Posted by Casey Handmer at 5:23 PM No comments:

Last Sunday my friend G and I crawled out of bed at 3:30am. For summer mountain/desert flying, the early bird gets the worm.

By 5am we were on our way, 6am refueling at the 'last services' at Daggett airport. Not long after we turned left at Baker and proceeded to fly through every single valley in the Eastern Sierra Fault Zone. Our route took us up the Amargosa valley past Tecopa, Shoshone, and Death Valley Junction, cut down over Zabriskie point, Badwater, and Furnace Creek, passed Salt Creek, the Mesquite dunes, Stovepipe Wells, Scotty's Castle, Ubehebe Crater, Tea Kettle Junction, and Racetrack Playa. Here I demolished a Clif Bar as we dropped into Saline Valley. 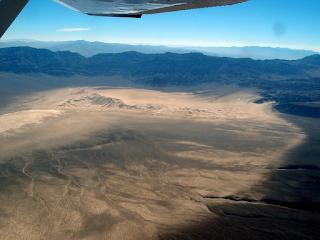 We flew over the Chicken Strip and hot springs, cruised up the Eureka Valley, turned left into Deep Springs Valley, and saw the remains of the Alma radio telescope. Before us the Sierras loomed to 14000 feet, and the Wacoba lake beds shored up the Inyo/White Mountains. We passed Bishop, Hamill, and crossed over to the Mono Basin at 10,500 feet above sea level. We continued north until Bridgeport and Bodie were in view, then turned back south into the only headwind of the whole flight, crossing into the Long Valley Caldera with the Mono craters on our right, checking out the various hot creeks and landing at Mammoth Yosemite Airport, right beneath the awe inspiring Convict Lake roof pendant. 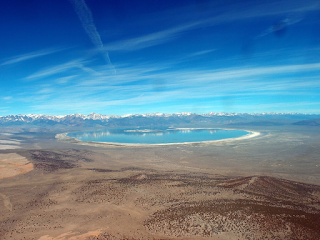 We watered the thirsty bird and once more took to the air, passing Lake Crowley and Bishop, then cruising down the Owen's valley past Big Pine, Independence, Manzanar, Lone Pine, and Owen's Lake. Here we turned left, crossed the Darwin Plateau, and flew the length of the Panamint Valley. With a quick diversion to check the state of the road connecting to Death Valley south of Telescope Peak, we popped over into the Trona valley, cruised past the pans and the pinnacles, before climbing up over the Edwards AFB restricted area and setting course for home. Once over Santa Anita racetrack I idled the engine and practiced a glide back to the airport, landing just a few minutes after 2pm, with 16.8g of fuel remaining.

I have been planning to do this flight for more than a year - finally the weather was just right: clear, and calm, to do the entire thing in one go. All I need now is a faster plane!

Posted by Casey Handmer at 2:38 AM No comments: