How to rig an election, or yet another think piece on gerrymandering

How to rig an election, or yet another think piece on gerrymandering

This technical note lays out a recipe for gerrymandering any given set of congressional districts.

Why is gerrymandering bad?

These two reasons drive partisan polarization for many, though not all, issues, and contribute to inefficiencies in the governing process.

There is a perception that a gerrymandered district is obvious, but a formal definition is surprisingly non obvious. Some ridiculous shape might help with the "know it when you see it" definition, but formally convex districts can also be gerrymandered. For the purposes of this discussion, I will consider a set of districts gerrymandered if their boundaries are statistically robustly shifting the x intercept of the swing/representation graph. 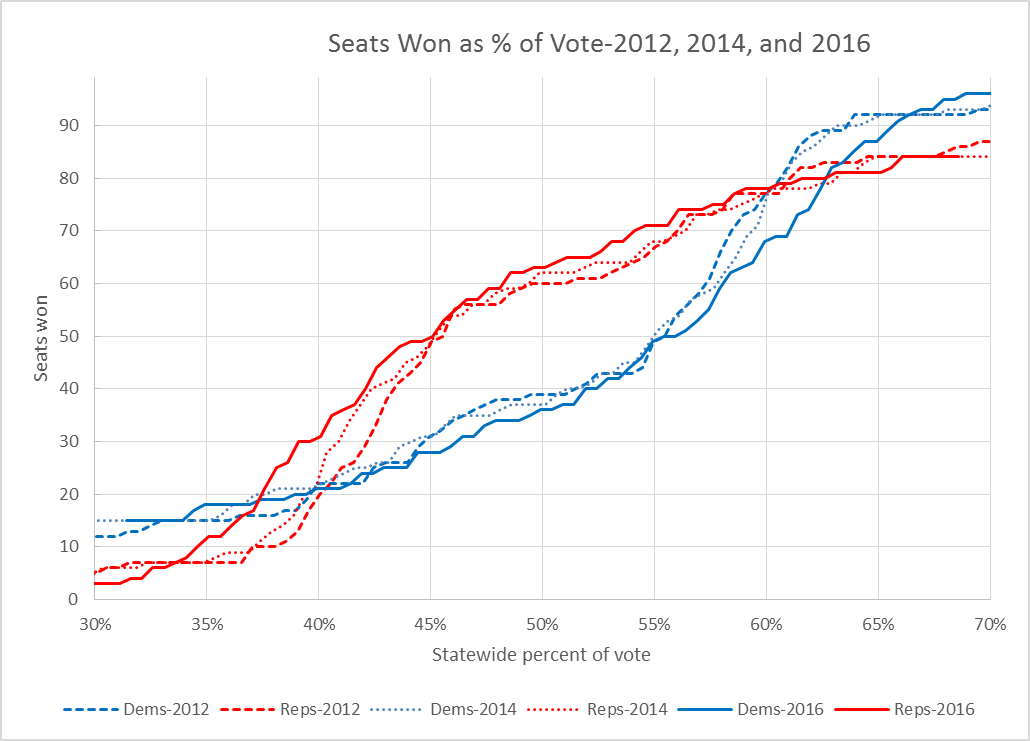 This graph shows a roughly even split of gerrymandering that ensures house safety even with a 5% swing. https://urbanmilwaukee.com/wp-content/uploads/2016/12/image00-3.png

There are many proposals for algorithms or mechanisms that can select less gerrymandered districts. My favorite proposal (today) is the "I cut, you choose" procedure, where each major party takes turns to draw one district of the appropriate size within the remaining area. This can tend to minimize the negative partisan effect of existing gerrymandering, but I will show that it doesn't actually solve the problem. It merely shifts it somewhere else.

Finally, there are a few other structural weaknesses of the US voting system, including the electoral college and non-preferential voting, but let's focus on one thing at once.

A note on divisive political issues

Elections in the US, where voting is non-compulsory, often swing on whether or not so-called "single issue voters" bother to show up. As a result, there is a disproportionate focus in partisan media and political commentary on a reasonably small set of these polarizing issues. Let's call them highly motivating divisive issues, or HMDIs.

There are many divisive issues out there, but only some are sufficiently motivating to be "big hills to die on." A good test case for whether an issue is an HMDI is whether it's the sort of thing that ruins Thanksgiving. It'll split a room and people just won't shut up about it, happily burning their family in the process.

The peculiar thing about HMDIs is that so many of them are fundamentally niche issues for the vast majority of US voters. I'm not saying they're not important or bellwether issues, but they just don't have a huge impact on the personal lives of most voters. For example:

My hypothesis is that the modern Democrat and Republican parties accidentally found themselves on either side of these issues which not only split the electorate roughly evenly, and along ideologically simple lines, but also conveyed a slight, unintentional x-intercept bias. Then the redistricting machine did its usual amplification procedure and here we are. In fact, we've even seen historical examples of both parties being on the other side of former HMDIs such as slavery, social security, or federalism.

We know that our current congressional districts are drawn to classify voters with known preferences into different groups to "pack and crack," or try to dilute the influence of opponents while amplifying the influence of allies. Therefore, it's fair to say that the current US electoral district boundaries are, in some sense, a representation of the natural distribution of an inhomogeneous electorate and its preferences. Remember that humans self-sort and self-segregate in statistically significant ways, but that any given divisive issue doesn't predict another particularly well. I would estimate that the total space of >500 issues can be covered reasonably well by the first 15 principal components in terms of geographic voter allocation.

I hypothesize that, were another HMDI to become politically important in the next decade, and its preference prevalence to differ from the background of existing liberal/conservative splits, even a bit, that congressional districts would be redrawn to maintain their maximally gerrymandered state.

Therefore, it's fair to say that it's possible to construct a perturbative map from an existing electorate to a future one, where the set of voters and their most important issues changes, but there is a smoothly continuous variation of district boundaries that maintains a maximum of partisan advantage.

This perturbative map rests on a hidden assumption that it's possible to analyse the stated and latent preferences of any demographic and to (re)draw a maximally gerrymandered district accordingly.

Given a weighted ranked set of HMDIs, then, it is possible to score any given (set of) potential congressional boundaries for partisan advantage, and select one accordingly. Given that it's difficult to be precise about which HMDIs matter and how much, this is not a particularly sound method for preventing gerrymandering, though it is a good (and proven) approach for maximizing gerrymandering.

The inverse map is more interesting. For any given set of congressional boundaries, the inverse map can generate a weighted ranked set of HMDIs. If, for example, congressional boundaries were redrawn at random after every election, political consultants would perform the inverse map to determine which issues were most likely to swing the election in any given district, then try to push a local agenda that raised the profile of these issues. It is important to note that while some of the issues are likely to be important to voters on both sides of the issue, other issues are likely to convey partisan advantage for only one party. For a historical precedent, see the staggering rise of anti-Muslim animus since 2001, becoming a supreme court issue (the Muslim ban) in only 15 years.

There is a further implication. Given a map gerrymandered to favor (say) Republicans, there will be a set of issues which divide that region to give, with the exact same boundaries, a gerrymandered advantage to Democrats. In reality, these issues are likely to be mostly relatively unimportant. But that doesn't mean it's not worth looking.

In other words, for any given map, electorate preoccupation with some issue will render partisan advantage. "This map is gerrymandered on abortion."

Conversely, for any given issue, there is a unique map which maximizes partisan advantage for this issue. "We gerrymandered this map on abortion."

Why is this interesting?

Do you find endless debates about abortion boring, but want to see some federal political attention given to, say, climate change, space exploration, or world peace?

Why is our political process obsessed with such insipid HMDIs? Who is driving this train?

I think it's fair to say that beyond a certain point, HMDIs function as memes that self-select given the existing set of congressional districting rules. This is a natural instability in the system and probably can't be avoided.

This is interesting because when maps are redrawn they can alter the relative importance of second-billing issues. We've already seen this - I don't think Newt Gingrich intended his strategy for political conservatism to see a resurgence of Nazism.

But a more involved quantitative understanding of this process, particularly if its precise workings can be concealed, leaves open the potential for major political meddling.

Let's redraw some districts around people who care about climate change and peaceful uses of rockets.

Posted by Casey Handmer at 8:23 AM