Late last Thursday evening I enjoyed watching Elon Musk deliver his second update on SpaceX's plans for Mars, or Making Humans Multiplanetary. If you haven't seen it, watching this video will make the rest of this blog much less confusing. I've written a bit about Mars over the years, and I'm always excited to hear what SpaceX has been up to.

A year ago, I wrote a blog about the plan as then presented, and I'm thrilled to see its evolution and write a bit about my new thoughts. I'm going to split this blog into three parts. The first will deal with the major development - money. The second will discuss the mission profile. The last will deal with Mars urban planning.

In 2016, it wasn't immediately obvious how to pay to develop the Mars rocket let alone run the program. A couple of months ago, I wrote a blog on this topic. And I'm thrilled that not only did I not guess what SpaceX was planning (though I was closish), what they have proposed is a better idea than anything I wrote about there.

SpaceX plans to retire the Falcon and build only BFRs for every mission it can think of. It will redirect all its engineering know how to building the new system, and thus finally find a method to freeze design of the Falcon 9 at Block 5 without further meddling! Why is Falcon a dead end? It is not fully reusable.

SpaceX can build and sell the Falcon 9 for about $65m for a single expendable launch. While their recovery of the first stage can help their business both by decreasing their fixed costs by a factor of perhaps three and increasing the number of boosters available, they can do a lot more. Even if they could refly the first stage hundreds of times with marginal cost per launch, the fixed cost of the expendable second stage, which must be near $10m, means that they can't revolutionize launch completely.

Here comes the realization. At $65m a launch they're already crushing the competition. With the landing of the booster SpaceX lacks credible competition for at least a decade. They could lower their launch cost to maybe $20m a launch and nourish the microsatellite market, but the overall demand for launches is likely to remain fairly static in terms of mass to orbit. This is because thousands of cube sats don't weigh much compared to the really big communications and military satellites.

Enter the BFR. The BFR might cost $500m to build. But if SpaceX charges $65m a launch - the same as it is doing today - and the BFR is entirely reusable, then it can recoup that cost within the first year of launches and then some. The BFR only has to fly about 10 times to close the business case, and there's no reason it couldn't eventually fly hundreds of times. Given that the cost of fuel is somewhere around a million dollars per launch, SpaceX has a huge advantage, because customers have no ability to force the price down against other competition who already charges between four and ten times as much as SpaceX.

The BFR is hugely over specced for any launch currently manifested. With a nominal capacity of 150T to LEO and perhaps 40T to GTO, there isn't a satellite it can't launch. Hell, it could probably launch any existing satellite into the sun. Well, not quite - it turns out that's really difficult. Does it matter that there's no real demand for 150T to LEO launches? Does it matter that the BFR will thus fly 5% full for most launches? Not if those launches are profitable. The airline industry's costs are about 13% for fuel, so a single BFR launch may cost as much as $5m, but SpaceX won't have many of the airlines fixed costs, like hiring pilots. So while the BFR's capacity could enable huge space telescopes or probes to Saturn or gigantic space stations, it can also fly mostly empty, or perhaps carry SpaceX's own cargo (such as fuel or internet satellites) with its excess capacity.

Here's another way to think about it. Given the current cost of launch is 100x the fuel cost, a fully reusable rocket could be 100x too big and still make economic sense. Why 150T, then? SpaceX wants these rockets to be big, for moving stuff to Mars. But really large rockets are harder to build and transport. Elon tweeted that the BFR was sized to fit through a door in an assembly facility. The door size constraint also set the size of the Saturn V.

Since last year's presentation, the performance of the Raptor engine has deteriorated slightly, which probably reflects its development path. It's worth pointing out that while a heavier BFR with a less exquisite Raptor might not be very useful for flying back from Mars, it is still capable of flying there, and more than capable of launching stuff into orbit around the Earth. Big dumb rockets suffer a design constraint which is that small changes in structural efficiency have big (and bad) effects on overall system performance. A good illustration of this is the evolution of the Falcon 9 rocket. When it first flew, it could only just loft 9.5T into orbit. Today, it is rated at 22.8T, even though the underlying plan remains the same. What changed? The engines got a bit better, and the rocket got a bit lighter. Imagine if the Mars ship, designed to lift 228T to Mars, turned out for the first few years to only lift 95T? The mission would be over. Elon briefly addressed this in the talk, when explaining a benefit of on-orbit refilling of fuel and oxidizer. Even if the booster turns out to suck, the spaceship can still be fully fueled in orbit, retiring that developmental risk.

What about the possible use case for high speed transport on Earth? Very roughly, the numbers check out here too. Oxygen and methane cost about $200/tonne, and each rocket needs about 4000T of fuel. So taking the airline numbers again, each flight could cost $5m. If each rocket can carry 150T of payload, that's about 1500 passengers, so the per head cost might come to $3000, which is comparable to current long haul costs. Interestingly, over shorter distances, the spaceship alone (without the booster) could make a flight. So this seems to address current usage patterns and cost structures, though is much more marginal than the launch business. Finally, although Elon would no doubt love a launch pad near every city, they are noisy places and town planners generally did not provision for the 4-6 mile exclusion zone they require. My eyebrows remain raised!

So what are we to make of the other efforts to bring about industrial capture of disruptable industries? Even though SpaceX's plan is to capture the launch market with a fully reusable rocket ("shuttle done right") it has a few other plays in internet satellites (Starlink) and tunnel boring (The Boring Company). I think these efforts are developing technology which is important for the Mars project and may eventually become huge sources of revenue themselves.

Elon Musk provided a few updates on the mission profile. As an example, the spaceship has enough ΔV to fly to the Moon and back without lunar refueling if refilled in an elliptical Earth orbit. This would take about three times as many tanker flights, first to fill up a tanker completely in LEO, then fly that to an elliptical orbit several times to refill the spaceship. A Mars ship launched like this could also take much more cargo to Mars, though its Mars entry would be proportionately more difficult.

I have heard some discussion about distribution of the engines and their uses. It is important to remember that the rocket is ten times heavier when fueled up, and the bigger engine bells work much better in space. Therefore, while one Raptor engine is adequate to land a nearly empty spaceship, all 31 on the first stage are needed to lift the whole stack off the Earth. Similarly, a fully fueled ship lifting off from Mars needs four high efficiency vacuum engines, while two sea level engines are adequate for landing.

I was fascinated to see the section on the Mars entry profile, as I wrote a somewhat less sophisticated model to study this problem some time ago. Landing on Mars is very difficult for all kinds of reasons, but attentive watchers may have noticed that the spaceship enters the atmosphere upside down. Why is that? It turns out that entering the Mars atmosphere at 8500m/s, as SpaceX plans to do, is easily fast enough to skip off and escape the planet entirely. The spaceship is a lifting body and uses its lift not to fight gravity, but to help gravity pull the vehicle closer to the ground as it tries to skip off the atmosphere. In my model I computed that the spaceship would have to fly below about 40km to be able to beat centrifugal force. In this way, the entering vehicle curves around the planet. When its speed drops below Mars orbital velocity (~3700m/s) then it gradually rolls to a nose up attitude, where its lift continues to dissipate speed until, falling straight down it lights the engine and performs a flawless landing on the surface. The 2017 spaceship has really pointy legs, so I hope they pick a really hard flat surface to land on.

The LEO refilling concept has also been simplified. Rather than two spaceships flying close along side like mating whales, they now back up to each other. A small thruster creates enough force for fuel to drain from the tanker to the ship. Alternatively, if the parking orbit is low enough, residual atmospheric drag could provide some ullage force.

Although this was not explained, I presume that the landing pads build on Mars have hatches beneath which coiled hoses can be lifted to the spaceship for autonomous refueling. For this and related reasons, I think the spaceship might need a robot arm. Similarly, while a crane on the ship can lower cargo to the surface, an established Mars base would have to have mobile gantries that can be rolled alongside like siege machinery to facilitate rapid unloading and loading of cargo.

Mars urban planning
Finally, Elon had a couple of slides on how the Mars base would grow. I like the images. I like all space-related concept art. www.humanmars.net has some of the best! 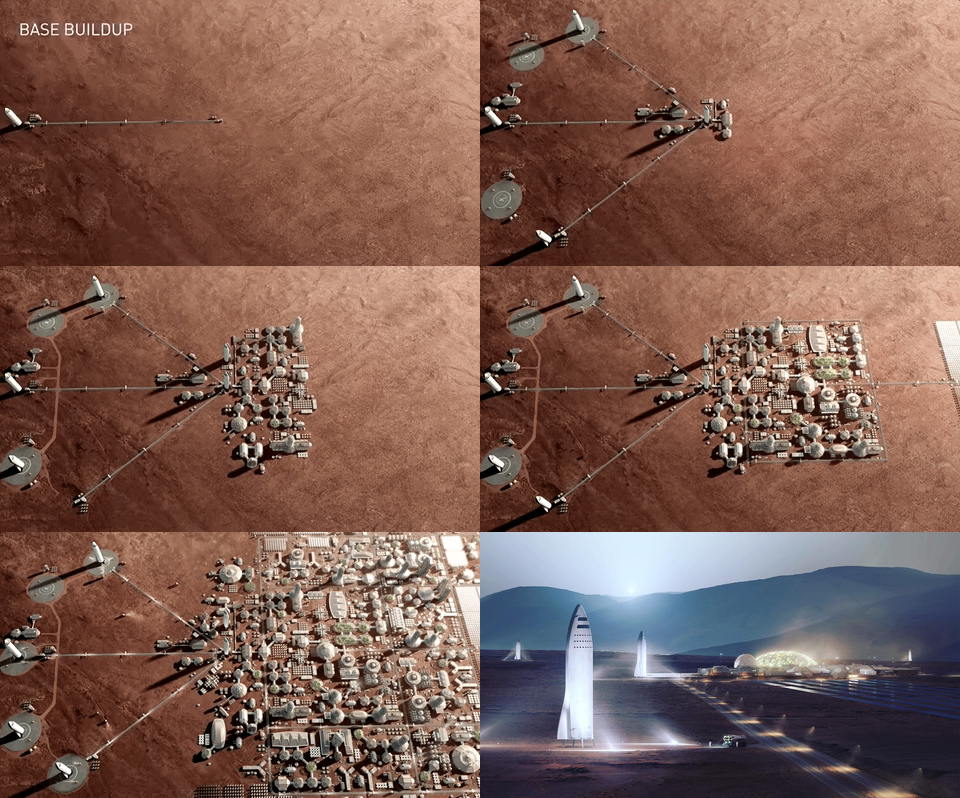 But these images are very Sim City. Will a Mars base actually look like that? What will a Mars base look like? Why? I talked a bit about Hab design principles in my Mars book. But Mars urban design is not an established field, and I think Elon was trolling us with this design. Indeed, I think SpaceX's main goal at present is to systematically derisk a human Mars mission to entice NASA and Congress to bite. Designing Mars bases is a few steps ahead. Moreover, SpaceX would like other titans of industry to join in and collaborate on these issues.

Conclusion
I can't wait to see what comes out over the next year. This, the settling of another planet, remains the single most challenging, exciting, and worthy problem for all of humanity. I firmly believe that if my generation doesn't achieve this, the eventual extinction of humanity is all but certain. For more in this vein, check out these epic Wait But Why posts.
Posted by Casey Handmer at 7:13 PM