Work! What do I actually do?

Some time before 28 March, 2011, my dear great aunt R asked me to do a blog post on what my actual research is. What is it that I actually do on a day-to-day basis?

The reasons for the absurd delay in writing this are many, but I think it's time to get on with it, since I finally published something. It can be found at http://arxiv.org/pdf/1406.7029v1.pdf .

In this post, I'll talk generally about what my day-to-day existence is like when I'm not doing exciting stuff I write blog posts about, and then I'll give an executive summary in plain English of what the paper is about.

Here's a photo of me in my office. 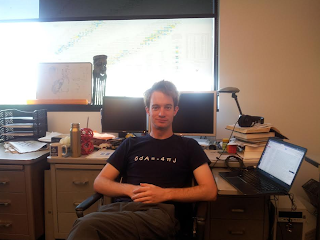 The second trick is both better established in the literature and less well known among my advisers, and it's called the Magnus expansion. As it happened I worked out the basics for how the method would work, tried to devise a name for it, googled the name, and found someone else (Magnus, as it turns out) had already discovered this rather obvious technique and, what's more, had written a paper doing all the hard sums for me. In this case, the Magnus expansion was applied to a matrix which represented some complex numbers. The equation had an annoying part which could be thought of as a phase. The Magnus expansion allowed this phase to be set to zero, and ignored until it could be dealt with in a consistent fashion. Again, incredibly seat-of-the-pants numerical methods, and I'm just lucky that when all was said and done I'd only wasted about 14 bits of precision, leaving me with perhaps 6 orders of magnitude to play with. For people who know the difference between single and double precision floating point numbers, the difference makes ALL the difference.
Okay, I had the basics of this method finalized a year ago, and permitted myself a shy smile. There were a bunch of other technicalities covered in the appendices related to translating information from the simulations into the form where my algorithm could deal with it. I crushed that problem on only the third try. At this point I could have published yet another theory paper, but if you want the method to be used, or for anyone to take notice, you need to actually prove that it works. Especially when the underlying methodology is so left-field and the apparent efficiency increase (hundreds or thousands of times faster) so unlikely seeming.
To prove that it works you need to show that its stable by feeding it garbage and watching it resolutely refusing to explode. You also need to show that it converges. That is, as you increase the resolution, it gets closer and closer to a particular value in a predictable and most importantly, extremely rapid way. The prescription for these sorts of graphs is well known, and its in this phase that cryptic bugs are eventually discovered. Sometimes they even have a comment nearby saying "\\this will cause problems I bet...".
When the code behaves itself, you finally need to compare it to results produced with another similar code. Afterall, it could converge to garbage, which would be useful to noone. In this case, it was compared to the code it was designed to replace. First I had to convince this no-nonsense older code to do what I wanted it to do, and then get the parameters right to prevent its own menagerie of stability and convergence issues. Principle problems include it never being designed to do what we had in mind. Similarly, my code was never designed to operate with parameters that could compare to the older code. After a few decades of wasted CPU time and more than a few false starts, we generated comparable data sets. By this time, enough of the problems had been worked out that they were close enough to publish, as you can see in Figure 8 of the paper. This figure shows that over the absurdly long time scale we ran this code, both codes were pretty accurate to begin with. Moreover, when the resolution was increased, the error dropped by a certain, predictable amount. Lastly, the difference between the two codes is also really tiny. Of course, there are always a few problems. For instance, the older code begins to lose convergence toward the end. Also, the codes resolve the junk radiation to differing extents.
Junk radiation is nonsense signal at the beginning caused by the fact that the simulations have to start somewhere. This insult to well behaved computers causes unphysical fake waves to bounce around inside the simulation and sometimes even stop it working properly. We think my code might be able to stop or reduce junk radiation in the future. Stay tuned!
It bears mentioning that this work was a team effort! I don't name names on this blog, but the most overt contributors are listed on the paper. For a more complete list, you'll have to wait for my thesis! But you know who you are, and without you, there is a good chance we would have never known this problem was, indeed, possible to solve.
​
Posted by Casey Handmer at 3:41 PM