Oh dear, another technical blog post! But first some other stuff.

I went sailing with the lovely P and friends last Sunday from Long Beach toward Catalina and back. Just as everyone else was starting to look pretty green, we saw a bunch of whales. One humpback came up next to the yacht. He or she was much bigger than our measly 34 foot yacht. We also saw many dolphins and a few sea lions and even a sun fish.

Back to technical stuff!

For those of you not following the tech blogs, the hyperloop is a blue-sky proposal recently made by everyone's favourite CEO, Elon Musk (of Tesla and SpaceX). Disappointed with the expense and slow speed of California's proposed high speed rail network, he came up with an innovative concept. After a year of hints and getting suggestions from his own employees, he finally released a whitepaper on the topic: http://www.spacex.com/sites/spacex/files/hyperloop_alpha.pdf . I recommend reading the first few pages at least.

The basic idea is you have a steel tube running from LA to San Francisco. Inside, it is pumped down to a thousandth of an atmosphere. A long, skinny capsule has an electric compressor on the front which pumps air into air bearings on the base, which allow it to move almost frictionlessly, like an air hockey table. At each end, an electromagnetic motor accelerates and decelerates the capsule. In between, the capsule can get quite close to the speed of sound before the airflow around it chokes and the efficiency decreases. The whole thing is powered with solar panels and runs on elevated pylons, and would allow a trip from both city centers of about 35 minutes, running mainly along the 5 expressway down the California central valley.

Part of the open-source approach is to ask various members of the community for suggestions and improvements. One major problem which bugged me was the part where the tube has to pass the mountains between Santa Clarita and Tejon Ranch. This part of the 5 is known as 'The Grapevine', and it's a rather twisty expressway. If the hyperloop went through there at its designed speed of 1200 km/h, occupants would experience 20gs of acceleration, which would probably be pretty final. Some of the curves have to be taken out, either with tunnels, bridges, or alternative routes.

I decided to attack this problem. The most interesting technical hitch was when I was using the google maps API to get elevation data, it eventually got fed up with requests and locked me out. So I downloaded the raw file from the USGS and had more elevation data than I knew what to do with! I have no experience in transport corridor planning, so had to make up stuff as I went along.

What I settled on was a genetic algorithm. Genetic algorithms are generally the second best algorithm to solve any problem. I start with a family of parametrized curves representing possible paths, and then evolve them using a cost function based on pylon heights, tunnel lengths, minimum radii of curvature and maximum grade. Costs were taken either from the hyperloop whitepaper or from typical industry costs for similar projects. 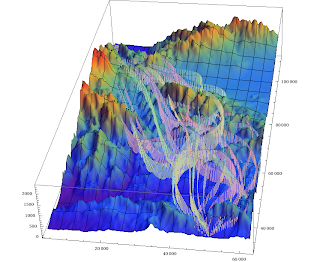 One such run of the algorithm found the following corridor, which I wasn't expecting. Here it is in relief and profile (scale in meters). It runs mostly just to the north of the 5 route. 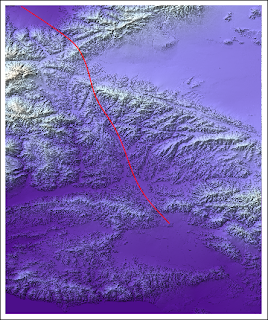 To people unfamiliar with southern California geography, the above box maps the 34N 118W graticule. At the top left is the southern extreme of the central valley and the intersection of the Garlock, San Andreas, Line Pine, and San Gabriel faults. At the bottom is the Santa Monica mountains, including the Malibu peninsula. The top right the Mojave basin/desert, and the bottom right is the LA basin. 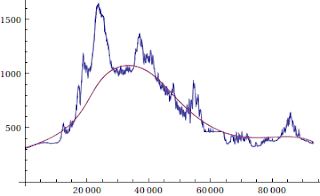 The flat bit at about 62000m is Castaic lake and dam wall.

The algorithm also spat out a lot of other answers, some of which were possibly useful. As always, a risk with genetic algorithms is that it will give you what you asked for, even if you asked for the wrong thing. At one point, my fitness function overvalued a straight track and undervalued the cost of tunneling, and I was rewarded with a tunnel from one end to the other! At other times, routes were returned with loops in funny places, sections hundreds of meters from the ground, etc.

The work involved in this blog took a couple of hours over the last few weeks. It's much less technical and much more accessible than my regular research, about which I have been unsuccessfully attempting a blog post for more than a year. Enjoy!