Dear reader(s), some of you may recall the inevitable yet tragic demise of Cassini in September 2017. This mission was in flight for 20 years, and in development for long before that. It was one of the most successful deep space robotic missions of all time.
Here's a video animation about its last moments in flight: https://www.youtube.com/watch?v=68vxYRAony8
Cassini was built and flown from the Jet Propulsion Laboratory, in Pasadena, California. Because I also live in Pasadena, I am lucky enough to know a few people who worked on Cassini! I found that over the last year, many of my friends and colleagues have been trying to understand the space left by Cassini.
Into this void I have added just a few cute ideas, some developed with friends, to function as reminders and memorials of this exquisite mission.
The first was an idea by Morgan Cable, executed collaboratively. I've made rings before with surface features including Mars and the Sierra Nevada mountains. For this one, we decided that the outside of the ring should be the interesting parts of the surface of Enceladus. Enceladus is a tiny icy moon of Saturn, and Cassini discovered that Enceladus has hundreds of ice volcanoes, revealing a potentially habitable ocean beneath the ice.
The interior has a relief sketch of Cassini itself, and a profile map of the rings of Saturn, ordered so that as the parts that stick out wear, they become brighter than the background. We chose stainless steel by i.materialise for the material, since it boasts really high resolution. The surface is a relief map focused on the south pole terrain. Because there is no publicly available (even within NASA) map of Enceladus topography, I wrote a program that took images of the surface and converted them to topography, using assumptions about surface brightness and solar angle. The map I have is not absolutely calibrated, instead I set the min and max altitudes so that the ring would have plenty of bumps on every side, but none too sharp! 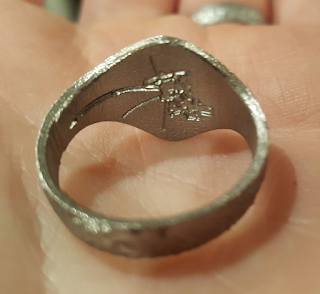 Cassini is inside the ring. 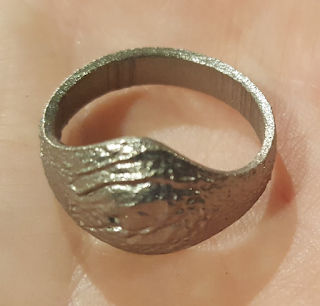 The fat part is the South Pole Terrain, showing the four "tiger stripe" fault lines where the cryovolcanic activity is concentrated.
The next project was a Cassini plushie. Late one night awash in Cassini-related sadness on Twitter, I was devastated to realize that there wasn't a tangible Cassini soft toy to hug. Because we live in the future, I was able to find a company that made custom plushies online, send some design notes, and then build it. I think it was the first time they had made a space robot (perhaps they based the design on a bee!), but I was very happy with the final product - I even added some eyes on the instrument platform. 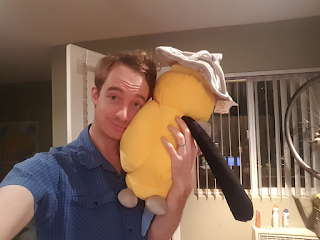 Here's me with the Cassini plushie. It has a magnetometer boom, a Huygens probe (an ESA-provided probe that landed on Titan), 3 RTGs, a little rocket, a high gain antenna, and an instrument platform. *sigh*
The final project (thus far) was inspired by Cassini's orbits. This image was taken from this video (https://www.youtube.com/watch?v=g2-7BFMLUuA) showing all the orbits of Cassini around Saturn. The final 10 years of the mission used the last percent or so of the fuel, so the mission planners had to be VERY clever about using Saturn's moons and their gravity to maneuver Cassini where it needed to go with just the tiniest orbital changes. 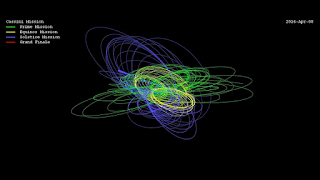 The last segment of the mission (in red) involved diving the spacecraft between Saturn and its rings for 22 last orbits before crashing into the planet.
A former Cassini mission planner and friend from Caltech theatre days David Seal suggested a version of his belt buckle with the orbits inside. It was non trivial extracting orbital data from the relevant database, but then I picked an orientation, squished it vertically, wrote some code to extrude the curve into a solid tube, then integrated it with a frame I drew up in OnShape. I've had some trouble printing the final version. Like many of my designs, it's right up against the limits of what these 3D printers can do. But I'm optimistic we'll get there. 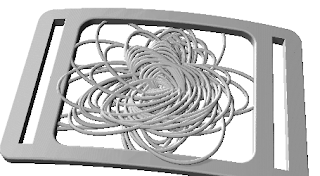 Here's an image of a prototype conformity check.

I'm always looking for new ideas for 3D printed stuff, so if you have an idea get in touch and we'll see what we can do.