This post is the first in a series describing a number of recent projects that I've recently completed! This one is to do with rockets.


Some time in 2015 I was reading some space exploration history and came across this photo on Wikipedia. 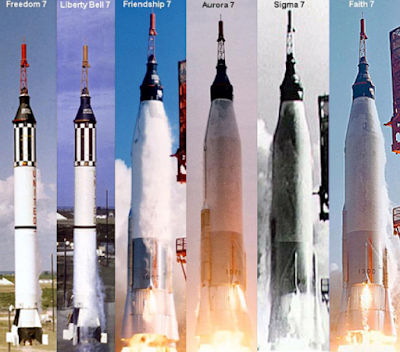 It depicts the Redstone and Atlas rockets launched with humans on board as part of Project Mercury - the first six flights to space by US astronauts - at their moment of lift off. At this moment, the rocket is supported entirely by hot expanding gases at its base and is pushing hard to escape the Earth. Of course no crewed flight has ever completely escaped Earth's gravity (yet) but getting to orbit is just staggeringly difficult and amazing.

Here's another photo in a similar vein. 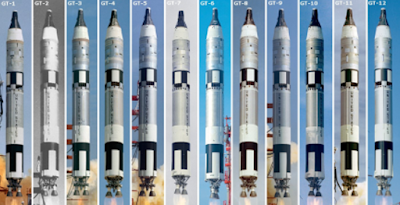 These are the launches in Project Gemini, ten crewed launches by Titan II to Low Earth Orbit to test technologies for the Moon landing. Each flight tested a variety of things, such as space walks, docking, control, orbital rendezvous, and the systems that made them possible.

The following Apollo program used two types of rocket, the Saturn IB and Saturn V. The Saturn V was the most powerful rocket ever launched, and here's a photo of every flight. 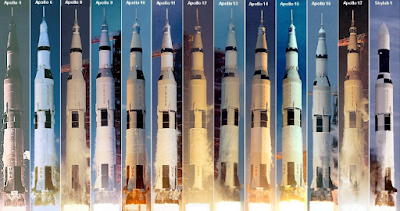 The first two flights, and the last flight, didn't have people on board. But Apollo 8-17 took three humans each into space. Six of these flights (11, 12, 14, 15, 16, 17) landed two people on the moon, a total of twelve humans who have ever walked on another rock. As of February 2018, seven of these have died of old age, leaving just five alive. Given the time it takes to develop space exploration programs, there's a good chance that even if China, Russia, the US, or any other country began development in earnest tomorrow, all twelve Apollo moon walkers would be gone before anyone else landed there. Food for thought.

After Skylab was launched on the last Saturn V flight, the three remaining vehicles were parked in various museums or fields and the US space program turned to the space shuttle. Over about 30 years, the five shuttles launched nearly 800 people into space on 134 separate successful launches. One more launch was not successful, and one re-entry was also not successful. The shuttle was retired in 2011, and since then no astronauts have launched to space from US soil.

Hopefully this won't be a permanent state of affairs. Several entities, including NASA, Boeing, SpaceX, Blue Origin, and Virgin Galactic are developing human rated space vehicles which are due to fly in the next few years.

Still, I was captivated by the minuscule number of rocket launches that have *ever* launched people to space, so I decided to make a version of the images above that included every single launch.

This process began with identifying every launch and a photo online and collating them in a gigantic spreadsheet. While I was at it I wanted to collect metadata - the who, when, where, why, and how, and combine this somehow. And since I was being ambitious, I have a separate spreadsheet for Soviet/Russian and Chinese launches of humans into space. In total, a meager 321 flights to date. Fact checking and proof reading all the metadata took FOREVER. But one really cool side effect was being able to make a world map with all the landing sites, colour-coded by program. 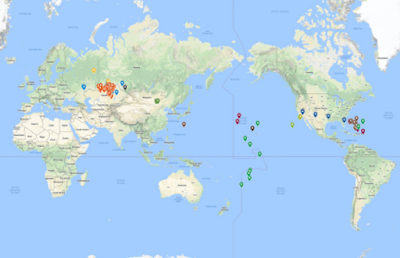 This is what the metadata formatting looks like in the final version. If you find any errors, be sure to let me know! 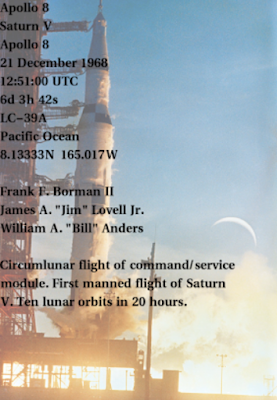 I quickly realized that photos at the moment of launch and the same perspective, while being in some cases difficult to find, are also very similar and thus monotonous. So I found a variety of photos of launch that captured some of the power and diversity of the experience. In 2011 I personally witnessed the last launch of the space shuttle in Florida, and it is really something else, even from 10 miles away.

After two years of neglect and then a few months of work, I'm pleased to report that the US launch poster is complete, and indeed hanging on the wall behind me! Moreover the metadata poster is also done. The full size images are available on my website, but this is what they look like! 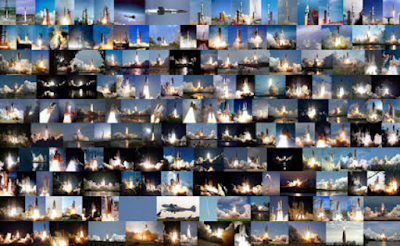 And the version with all the metadata. 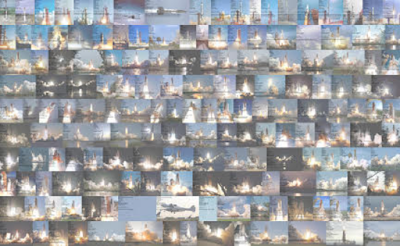 As an important note, Challenger's final flight is not included in this list as it did not make it above 100km, the boundary of space, before catastrophe struck. By this criteria, other failed missions including Columbia's last flight, Soyuz 1, Soyuz 11 are included as they reached space before suffering fatal accidents during landing. Finally, Soyuz 18a, which suffered a staging fault but reached an apogee of 192km before (barely non fatally) crashing to Earth, would also be included. Early X-15 flights which went above 50 miles (80km) but not 100km, are excluded.

I would love to make a Russian version or even a combined version, but unfortunately publicly available photos of Russian launches are often of very poor quality, or even missing entirely. If anyone can find me a photo of Vostok 3, Vostok 5, Soyuz 12, Soyuz 18a, Soyuz 22, Soyuz 23, Soyuz 34, or Soyuz T-14, that would be amazing. Russia is still regularly flying people to space, so the poster would probably have to have a few blank spaces towards the end!

In the meantime, I literally cannot wait for a new US human space launch so I have to update and fix the poster. I'm glad to have finished it off and I hope you enjoy looking at it as much as I enjoyed making it. 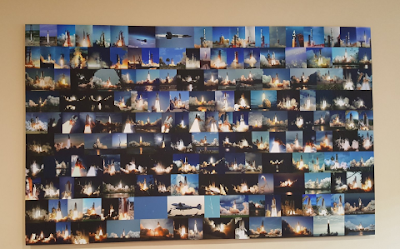 Posted by Casey Handmer at 4:52 PM