We have found gravitational waves! 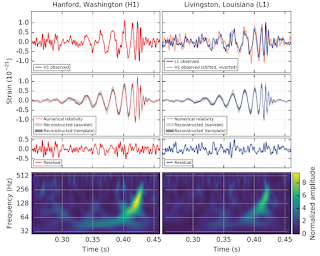 So, given this wave, where did it come from? We were able to fit a waveform to the observed signal, matching it with a computer simulation. From this, we can determine that the source is a pair of black holes each about 30 solar masses, roughly 150km across, that orbit each other at a steadily increasing rate. They emit gravitational waves, decaying their orbits, until at last their event horizons merge and only one, larger, black hole emerges. The whole thing - 10 orbits, over a distance of less than 1000km, occurs in less than a second - the black holes approach the speed of light. These black holes merged over a billion years ago, back when most of the rocks in the grand canyon hadn't yet been laid down and life was still unicellular. The signal, and LIGO's sensitivity bucket, lies in the human audible range, and can be perceived as a low frequency rumble and thump, if your sound system is good enough. https://www.youtube.com/watch?v=TWqhUANNFXw
In the above image, taken from the primary paper, you can see the signals reach the blindingly powerful strain of 10^-21. Which means that the mirrors moved by about a thousandth of the width of a proton, which is a million times smaller than an atom. Not bad for a system made of atoms and measured with discrete photons of light with a wavelength of a mere 10^-6m. During the last tenth of a second of the black holes' separate existence, they emitted a lot of energy as gravitational waves. The equivalent of 3 solar masses worth, to be precise. This is also an incredible amount of energy. For that tenth of a second, the black hole binary dissipated more energy than every star in every galaxy in the entire visible universe. 50 times more. If that energy were in the visible electromagnetic spectrum, instead of gravitational waves, it would (briefly) be brighter than the full moon, despite being more than 50 times as distant than the Andromeda galaxy, the most distant object normally visible to the unaided eye.
Already, we know far more than we ever did before. Black hole binaries exist - and might even be common. Intermediate black holes, in the 10s of solar masses, exist! Perhaps they originated from earlier mergers, perhaps from single older massive stars with low metalicities. Metals, generated in the cores of dying stars, make second generation stars significantly less transparent and limit how much mass is left over to form a black hole. There are almost certainly more signals in this, the first science run of Advanced LIGO. Up until now, everything we know about our universe (except for a few stray neutrinos) we have learned using electromagnetic waves - light, radio, x-ray, gamma rays, microwaves. As of 2016, humans can now hear the universe as well as see it, showing us all kinds of things that are there, even if they don't glow. We are sure to be in for some surprises.
No blog of this length would be complete without a mention of the founders of LIGO. Three venerable academics can claim that title, all still alive and, to an extent, kicking. Kip Thorne, the executive producer of Interstellar and professor emeritus at Caltech, Rai Weiss, of MIT, and Ron Drever, who built the 40m prototype, are names you may hear later this year in connection with a royal trip to Sweden!
Some of my readers may be familiar with my own doctoral work at Caltech, where I was part of the numerical relativity group. My own infinitesimal contribution concerned one aspect of producing simulations of binary black holes, which we use to help detect, and then back out the physical properties of the signals we detect. I don't think my research was used in this particular detection, but if I discover otherwise I'll certainly update this blog!
Perhaps you want to know more? One positive trend in science is the open access movement, whereby publications pertaining to publicly funded research are made publicly available, instead of by subscription only. Physics is generally ahead of the curve in this respect, and all of the (15ish) papers, data, and data processing software related to this discovery is freely available online.
Papers 100-113+ on https://www.lsc-group.phys.uwm.edu/ppcomm/Papers.html, click the ArXiV link in the 5th column, download the pdf.
Open data https://losc.ligo.org/events/GW150914/
Process the signal yourself: https://losc.ligo.org/s/events/GW150914/GW150914_tutorial.html
Wikipedia https://en.wikipedia.org/wiki/First_observation_of_gravitational_waves
I'm not the first, only, best, or most handsome scientist to also blog on the topic. Here are a few others, often focusing on different aspects of this incredible discovery.
Blog by Sean Carroll, a professor at Caltech. http://www.preposterousuniverse.com/blog/2016/02/11/gravitational-waves-at-last/
Blog by John Preskill, another Caltech professor.
http://quantumfrontiers.com/2016/02/11/ligo-playing-the-long-game-and-winning-big/
Blog by Roger Blandford, a professor at Stanford and occasional coauthor of Kip Thorne.
http://www.scientificamerican.com/article/the-detection-of-gravitational-waves-is-a-triumph-for-physics/
Blog by Mark Hannon, a professor at Cardiff.
http://fictionalaether.blogspot.com/2016/02/gravitational-waves.html
Posted by Casey Handmer at 8:20 PM