Article originally published in The California Tech on June 1, 2015

On May 23, John Nash and his wife, Alicia Lopez-Harrison de Lardé, died in a traffic accident in New Jersey. Two other people were injured. Nash was returning from a trip to Norway, where he had been awarded the Abel Prize in recognition of his extraordinary career and contributions to the field of mathematics. Nash's life was memorialized by the 1998 book and 2001 film A Beautiful Mind.

Nash was born in West Virginia in 1928, and attended the Carnegie Institute of Technology (now Carnegie Mellon University) where, his interests evolving, he switched majors from chemical engineering to chemistry, and finally to mathematics, graduating in 1948 with a B.S. and M.S. He followed this with graduate work at Princeton University, earning his Ph.D. in 1950 at the age of 21. His 28-page doctoral thesis (https://goo.gl/IJC4mB) introduced non-cooperative games and the Nash equilibrium, for which he subsequently was awarded one-third of The Sveriges Riksbank Prize in Economic Sciences in Memory of Alfred Nobel 1994.

Nash was hired by MIT in 1951. In 1952 he fathered and subsequently abandoned his first son, John David Stier. His summer research work on games and the Cold War for RAND Corporation came to an end in 1954 when he was stripped of his clearance after being arrested in a homosexual sting operation at the height of the McCarthy-era hysteria. In 1956 he proved Hilbert's 19th problem, only to find an independent solution had been published by the Italian mathematician Ennio de Giorgi just months before.

Around this time, Nash met Alicia Lopez-Harrison de Lardé, an MIT-educated physicist originally from El Salvador. They married in 1957 in a Roman Catholic ceremony, despite Nash's atheism. In 1958 he was tenured at MIT, but by 1959 his mental illness began to manifest. Nash resigned from MIT and underwent sporadic treatment for schizophrenia for much of the next decade. His second son, John Charles Martin Nash, was born soon after his first admission. Although Alicia and Nash divorced in 1963, he ended up boarding in her house following his release from his last hospitalization in 1970.

While he never stopped mathematical research entirely after the sudden onset of his illness, his gradual recovery during the 1970s and 1980s saw a second blossoming of his mathematical creativity and a series of productive collaborations, initially using email. During the 1990s, he resumed some teaching duties at Princeton and, in 2001, Nash and Alicia remarried. Nash has stated that through his recovery he learned to manage the societally challenging aspects of schizophrenic behavior while trying not to restrict his incredible creativity.

While Nash is best known for his work on games theory, with 21 publications he made an array of astounding and sometimes baffling contributions to many other areas of mathematics. His recently declassified work on cryptography in the early 1950s was decades ahead of its time. His proposed encryption/decryption algorithms, while different from RSA or GPG, are similarly based on the concept of computational hardness and have since been shown to be as effective.

He made contributions to algebraic geometry and topology, and work in geometry produced the Nash Embedding Theorem in 1966, which showed that every Riemannian manifold can be isometrically embedded into some Euclidean space. Constructive proofs soon followed and today it's possible to visualize the embedding of a square torus in 3D space. 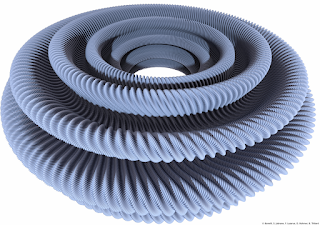 Posted by Casey Handmer at 5:41 AM