This is a new spacecraft concept capable of landing on the surface of Mars and eventually returning to Earth in essentially complete form. This spacecraft, the Wide lifting bodY Vehicle for Earth ReturN or WYVERN, is envisioned as a versatile chassis capable of a wide variety of missions with minimal changes. While many sizes are possible, such a spacecraft must meet the following requirements:


How is it done today - what are limits of current practice?


What’s new in WYVERN - why will it succeed?


Who cares? What difference will it make?


Current and planned missions to Mars both robotic and crewed are fundamentally limited by the requirement of multiple unique specialized spacecraft, each of which requires separate design, testing, and all of which form single points of failure. None of these spacecraft are particularly versatile, few form a fundamental design which can be updated or improved without substantial redesign and development costs.

The proposed design will form a basic chassis with raw capabilities that can be customized in many directions without requiring redesign of the mission-critical components: entry, descent and landing, propulsion, guidance, navigation and control, and so on. Mass analysis below indicates that as a one-way lander with 50T gross mass, it can deliver ~25T to the surface. With in-situ resource utilization for return fuel manufacture, it can deliver ~15T and return ~5T to Earth, as well as the reusable spacecraft. It can also readily perform missions in the Earth-moon system.


What are key unknowns?


How much time and money is required?


The spacecraft is estimated to be similar in weight and materials to a mid-size jet aircraft such as the 737, with commensurate development and construction costs. With cost of development amortized over many missions, this represents a substantial (> order of magnitude) improvement in cost over other proposed Mars mission architectures, such as SEI or Constellation, which involve much more complicated conops, greater mass, and less versatility.

I'm a physicist, not an expert digital modeler or authority on hypersonic aerodynamics. Nevertheless, it is possible to present a rough sketch of WYVERN in various configurations.
Entry configuration:

The central blue cylinder is fuel tank, mostly empty during the outbound voyage, with several magenta domes partitioning it into different sections. Green cones are rocket engines. Blue triangles are tails to shift center of drag behind center of mass. Brown marks the edge of the vehicle envelope, with a basic flattened triconic profile and heat shield on the bottom.

Here, WYVERN has inverted to land with engines facing down, and heat shield facing up. With clearance beneath and a spread, stable posture, WYVERN is ideally suited for the loading and unloading of cargo without a crane and/or 15 floors of stairs.

A single stage flight from Mars’ surface to Earth’s surface requires approximately 7.8km/s of delta-V, at best. Given eight advanced methane-oxygen engines with an Isp of 380s, the requisite mass ratio is 8:1. That is, a mass of x landing on Earth requires a launch mass of 8x, or 7x in fuel and oxygen. An initial:final mass ratio of 8:1 (for soft-cryo props) is small by comparison with the 23:1 ratio achieved by modern booster rockets, such as the Falcon 9 first stage.

By combining the structural elements of fuel tanks and airframe, WYVERN achieves a much lower dry mass than more conventional designs.

Note that these figures are for the Mars lander only. They do not include the mass of the LEO-TMI booster(s), outlined in the configuration section.

The ISRU unit consists of a chemical reactor, a nuclear reactor, associated plumbing, and hydrogen feedstock. It generates methane and oxygen via the Sabatier reaction and Reverse Water Gas Shift reaction according to well understood principles. In the context of a manned mission, the reactor would be deployed by remote control on the surface prior to fueling and activation. A solar array can provide auxiliary power during cruise or on the surface, though does not produce nearly enough power to complete ISRU within the ~500 day window between landing and return to Earth. A scaled down WYVERN for sample return could use a large, disposable solar array on the surface for ISRU power. If the mission profile calls for two WYVERNs; one Earth return vehicle to land two years earlier and produce fuel before the crew transport WYVERN arrives, then the reactor only needs to go with the first vehicle, and can stay on the surface, fueling the crew transport vehicle after the mission has concluded. Later, the crew transport vehicle could fly additional samples back or function as a backup.

Entry, descent and landing profile
WYVERN employs an innovative, back first entry profile. WYVERN’s heat shield forms the roof of the spacecraft in standard landing configuration. With a hypersonic L/D ratio of ~2.5, WYVERN is capable of skip entry and substantial cross-range performance. During supersonic cruise at terminal velocity (~500m/s), WYVERN completes a 180 degree roll, pitch up maneuver, and retropropulsive descent and landing using four clusters of 2 130kN redundant high Isp methane oxygen motors analogous to Dragon V2. Powered flight continues for around a minute, first decelerating at full power, then descending under controlled flight to a soft landing. In more detail, with a peak thrust of 8x130kN and an initial mass of 50T, WYVERN can decelerate at 21ms-2(much greater than Mars’ surface gravity of 3.8ms-2), taking roughly 30 seconds to slow down from terminal velocity to begin a powered descent at reduced thrust. 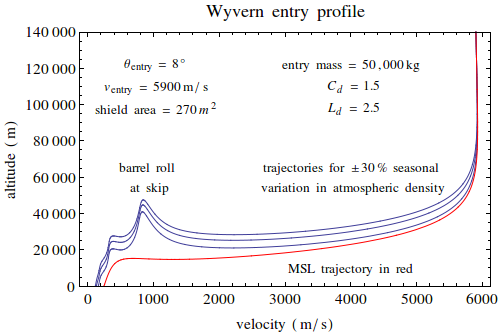 A basic simulation of WYVERN entry using banking to suppress hypersonic skipping until around 1000m/s, where the barrel roll may be performed during a natural peak in the trajectory. MSL’s entry profile, computed using the same simulation and publicly available data, is included in red for comparison.

Launch profile
WYVERN launches from Mars in its horizontal configuration. Mars’ atmosphere is thin enough that there is no substantial performance impedance from climbing to orbital speed with the flat side up. Total delta-V loss is less than 30m/s compared to vertical orientation, or -6m/s for no atmosphere.

Different internal configurations can be built within the framework formed by the aeroshell, central fuel tank, and propulsion units.

Given a more capable Earth-LEO booster, the WYVERN design can be readily scaled up. Released information suggests a SpaceX BFR LEO capability of 200T. This would enable direct launch of one WYVERN to TMI, or a similar profile to that outlined above with a single WYVERN scaled up by a factor of 4, which would transport 100T cargo to the surface. The only relevant design constraint in scaling is ballistic coefficient, which dictates that a high capacity Mars lander must be, on average, no thicker than a few meters in the transverse direction.

Radiation
With 8.5T of H2, 8T of O2, and 2T of CH4, as well as stores of water or food, there are ample quantities of low atomic mass nuclei to form a radiation shield for coronal mass ejection-type radiation during the outbound voyage. On the return voyage, reduced quantities of fuel and oxidiser (1T CH4, 4T O2 plus consumables) still allow for adequate radiation shielding of roughly 25g/cm^2 of shield wall.
Solar radiation fills the half-space in the direction of the solar magnetic field, where a gyroradius of about 1000km prevents a strictly ‘line of sight’ shielding methodology.

Posted by Casey Handmer at 1:18 PM