I think it is time for some lighter fare! This is a blog analysing a letter written by my long-deceased great grandfather, Hector McKenzie. It was recently forwarded to me by my grandmother! 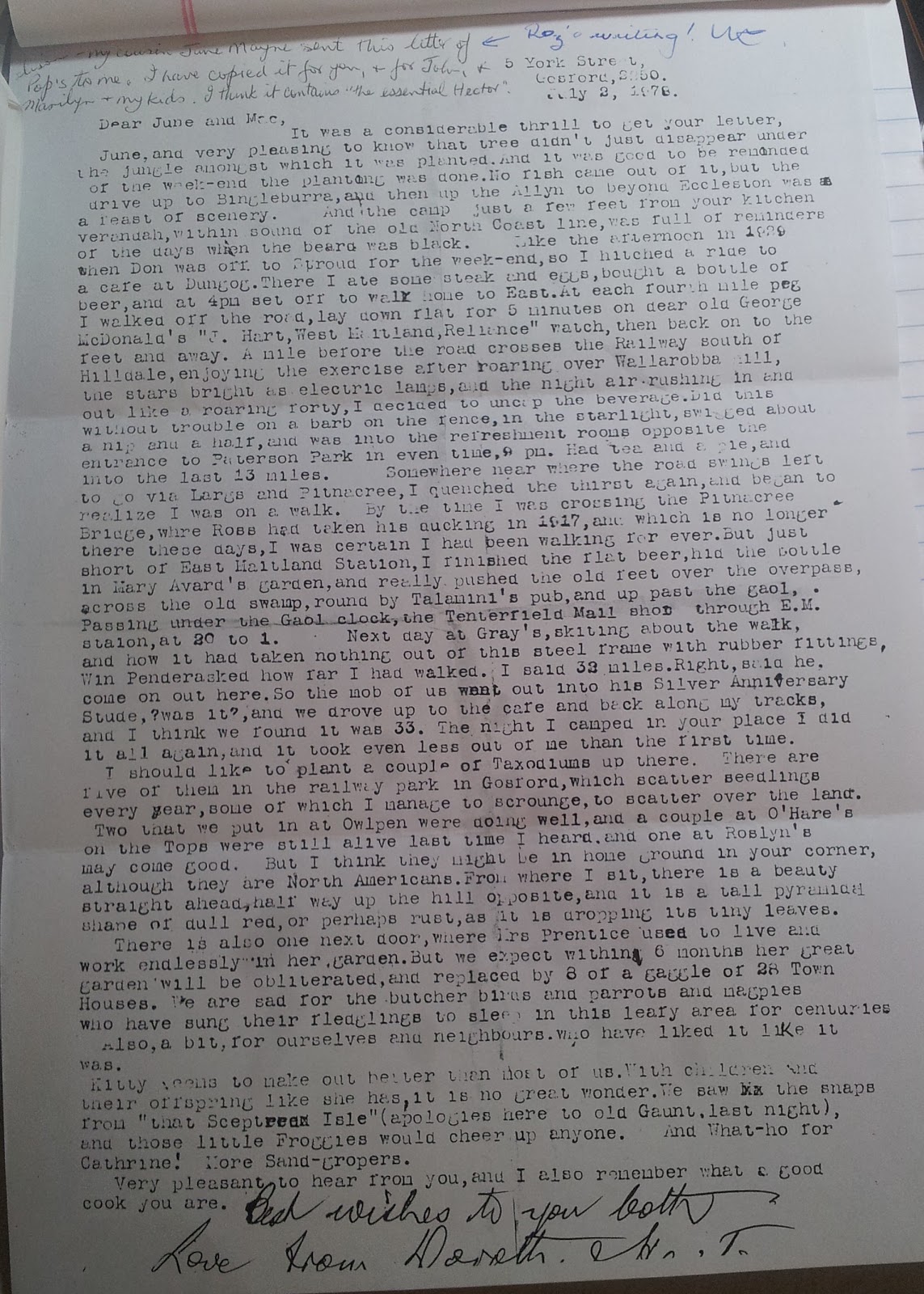 [handwriting]
Alison - my cousin June Mayne sent this letter of Pop’s to me. I have copied it for you, and for John, and Marilyn and my kids. I think it contains “the essential Hector”.
[handwriting, blue]
Roz’s writing! MC
[typewriter]
5 York Street, Gosford 2250. July 2, 1976.
Dear June and Mae,
It was a considerable thrill to get your letter, June, and very pleasing to know that tree didn’t just disappear under the jungle amongst which it was planted. And it was good to be reminded of the week-end the planting was done. No fish came out of it, but the drive up to Bingleburra, and then up the Allyn to beyond Eccleston was a feast of scenery. And the camp just a few feet from your kitchen verandah, within sound of the old North Coast line, was full of reminders of the days when the beard was black. Like the afternoon in 1929 when Don was off to Stroud for the week-end, so I hitched a ride to a cafe at Dungog. There I ate some steak and eggs, bought a bottle of beer, and at 4pm set off to walk home to East. At each fourth mile peg I walked off the road, lay down flat for 5 minutes on dear old George McDonald’s “J. Hart, West Maitland, Reliance” watch, then back on to the feet and away. A mile before the road crosses the Railway south of Hilldale, enjoying the exercise after roaring over Wallarobba hill, the stars bright as electric lamps, and the night air rushing in and out like a roaring forty, I decided to uncap the beverage. Did this without trouble on a barb on the fence, in the starlight, swigged about a nip and a half, and was into the refreshment rooms opposite the entrance to Paterson Park in even time, 9pm. Had tea and a pie, and into the last 13 miles. Somewhere near where the road swings left to go via Largs and Pitnacree, I quenched the thirst again, and began to realize I was on a walk. By the time I was crossing the Pitnacree Bridge, where Ross had taken his ducking in 1917, and which is no longer there these days, I was certain I had been walking for ever. But just short of East Maitland Station, I finished the flat beer, hid the bottle in Mary Avard’s garden, and really pushed the old feet over the overpass, across the old swamp, round by Talamini’s pub, and up past the gaol. Passing under the Gaol clock, the Tenterfield Mall shot through E.M. station, at 20 to 1. Next day at Gray’s skiting about the walk, and how it taken nothing out of this steel frame with rubber fittings, Win Pender asked how far I had walked. I said 32 miles. Right, said he, come out here. So the mob of us went out into his SIlver Anniversary Stude, ?was it?, and we drove up to the cafe and back along my tracks, and I think we found it was 33. The night I camped in your place I did it all again, and it took even less out of me than the first time.
I should like to plant a couple of Taxodiums up there. There are five of them in the railway park in Gosford, which scatter seedlings every year, some of which I manage to scrounge, to scatter over the land.
Two that we put in at Owlpen were doing well, and a couple at O’Hare’s on the Tops were still alive last time I heard, and one at Rosyln’s may come good. But I think they might be in home ground in your corner, although they are North Americans. From where I sit, there is a beauty straight ahead, half way up the hill opposite, and it is a tall pyramid shape of dull red, or perhaps rust, as it is dropping its tiny leaves.
There is also one next door, where Mrs Prentice used to live and work endlessly in her garden. But we expect within 6 months her great garden will be obliterated, and replaced by 8 or a gaggle or 28 Town Houses. We are sad for the butcher birds and parrots and magpies who have sung their fledglings to sleep in this leafy area for centuries.
Also, a bit, for ourselves and neighbours, who have liked it like it was.
Kitty seems to make out better than most of us. With children and their offspring like she has, it is no great wonder. We saw the snaps from “that Sceptred Isle” (apologies here to old Gaunt, last night), and those little Froggies would cheer up anyone. And What-ho for Cathrine! More Sand-gropers.
Very pleasant to hear from you, and I also remember what a good cook you are.
[Handwritten]
Best wishes to you both.
Love from Dorothy and Hector

Discussion
I found this letter extremely interesting. Although I have travelled to Stroud and Dungog a few times during my life, there was little context at a young age to anchor the landscape in both place and time. Fortunately the internet exists, so I decided to unpack some of the detail. According to Google, the walk was indeed 52.1 km, or 32.37 miles, which is longer than a marathon. Australian English often uses 's' in place of 'z', but I was interested that Hector used 'z' in 'realize', perhaps a hangover from his time spent practicing dentistry in Canada in the late 1930s.

Map of the Hunter Valley, home of excellent Australian wine and some of the biggest open cut coal mines on Earth. 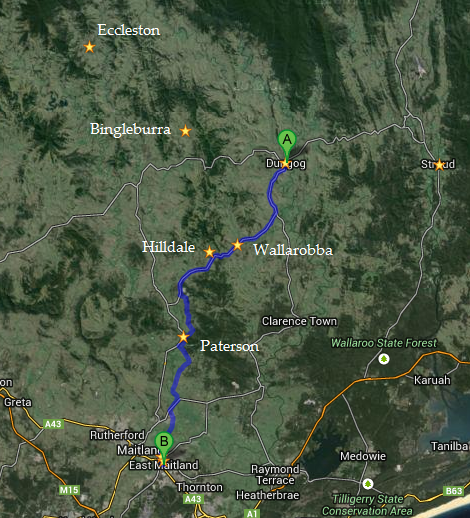 Geological context. Eccleston is just south of Barrington Tops National Park, a heavily eroded volcanic remnant. The north-south lineations just north of Stroud are part of the New England fold belt, derived from the Hunter Bowen orogeny during the Permian and Triassic, 250-220 million years ago. 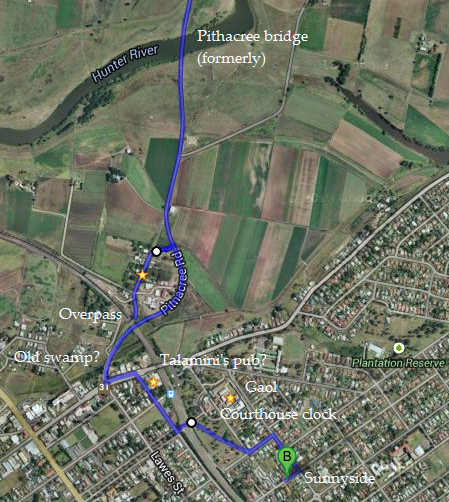 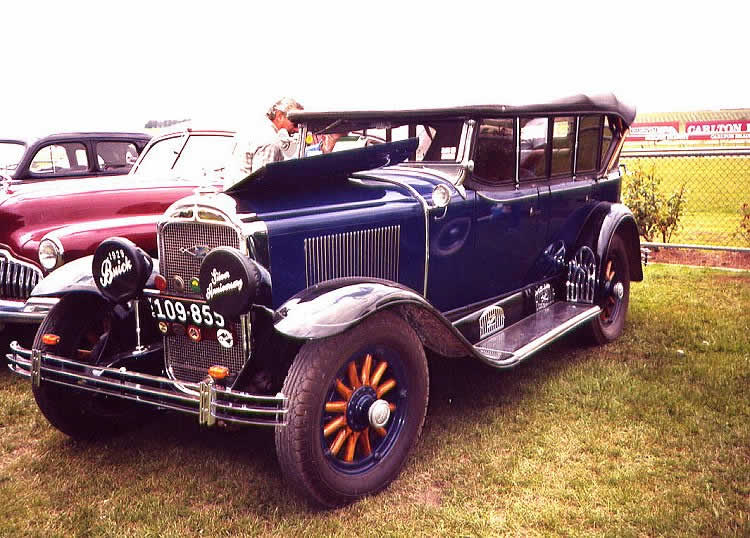 The Reliance Watch was sold exclusively in Australia by J. Hart in West Maitland, according to a paragraph in “The Maitland Mercury” dated July 23, 1887.
http://trove.nla.gov.au/ndp/del/article/18888959
Mentioned once more in the issue of June 9, 1889, in the context of mechanism improvements and maintenance.
http://trove.nla.gov.au/ndp/del/article/18972067
J Hart and Co Jewelers were bought out in 1939.
http://www.maitlandmercury.com.au/story/100959/a-right-royal-medal-from-1897/
Their building at 418 High St bears an inscription stating construction in 1855, or possibly 1885. 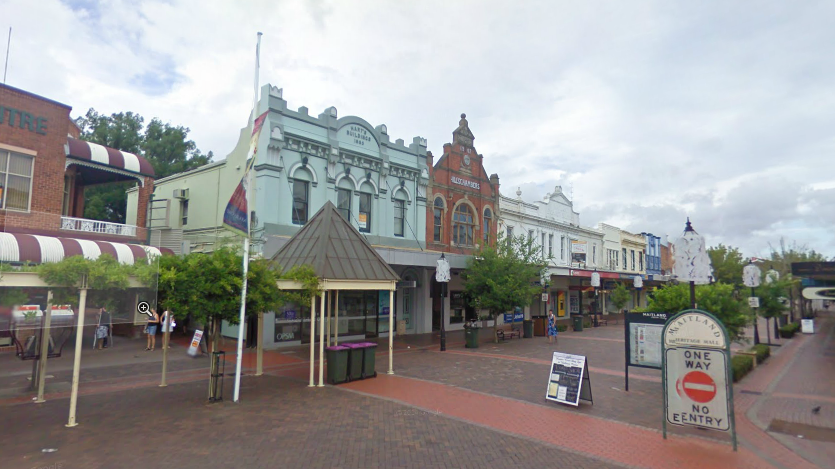 The watch looked probably very similar to this, a Reliance watch from the same era. 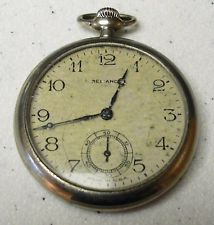 Taxodium is one of three species of swamp cypress native to the American south. Trees in the northern part of its range are deciduous. As far as I know, the one he planted in Mullum (Huonbrook, near Mullumbimby) is still going strong. 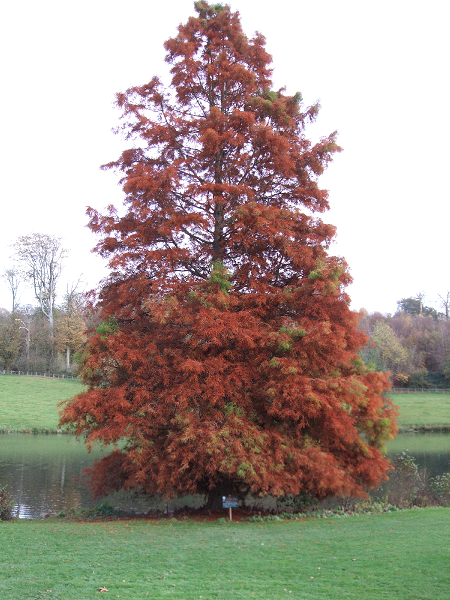 After turnoff at Dungog road

Looking down the Wallarobba hill

Paterson Park with war memorial and station in the background.

Pitnacree bridge was demolished after the Hunter river changed course in 1951. http://www.patersonriver.com.au/places/pitnacreebridge.htm

Pitnacree main street. I'm unsure which is Mary Avard's garden, but I think it might be the one behind the mower

Turning onto the home street, with only a few yards to go

Time for a nap

Hector "Darpop" McKenzie had a long and extremely interesting life. He left school at 16 to jackaroo during the first world war, went back to school and taught himself Latin in six months, entered dentistry school, practiced dentistry in Gosford (where I was born half a century later), beginning in the Great Depression. Although a lot of the houses of that era no longer survive, the small cottage in which he grew up (with 8 siblings!) in Maitland is still there. Well into old age he was an avid fisherman, motorcyclist, and bushwalker. My father relates an anecdote that during the building of the first family home when I was about -1, Hector (aged ~86) showed up having hiked a few miles from the nearest sealed road, bringing his racing axe and a few sandwiches to help clear the land. He is my mother's mother's father, and he died in 1989, shortly after my brother was born.
Posted by Casey Handmer at 5:37 PM