This article originally published in the California Tech November 26 2014.

In November 2013, Ukraine's then president Viktor Yanukovych, playing EU and Russia off each other in an attempt to secure necessary foreign investment to counter nine years of economic stagnation following the 2004 Orange Revolution, reneged on an agreement for stronger economic and political ties with the EU in favor of Russia. Ukraine's capital, Kiev, is located in the more pro-EU western side of the country, and protests broke out.

By February 2014, the Maidan square protests had intensified. A series of violent escalations blamed variously on the U.S., NATO, Ukraine, Russia, and the Illuminati culminated in Yanukovych fleeing Ukraine for Russia, followed by the instatement of a provisional government, the reversion of the constitution to an earlier state, and new presidential elections. Yanukovych's private palaces were opened to the press and public, underscoring Ukraine's ongoing struggle with official corruption and releasing thousands of private records to public knowledge and analysis.

Yanukovych could not be described as a uniformly pro-Russian agent, but his loss in favor of parliamentary power sent shockwaves through the Russian military establishment, particularly since Ukraine's ongoing lease of port facilities in Crimea's Sebastopol are of vital importance to the Russian Black Sea fleet.

This concern led to the shadow annexation of Crimea shortly afterwards. Begun by pro-Russia paramilitary forces, many led by veterans of the Bosnian conflict in the mid 1990s, green-clad troops lacking identifying insignias or names rapidly seeded Crimea.. Their presence catalyzed the peaceful co-option or withdrawal of the Ukraine military presence in the Crimean peninsula, which subsequently declared de facto independence. On March 16, a referendum was held in which residents were asked to choose between aligning with Russia or adopting Crimea's 1992 constitution, in which it was a semi-autonomous state within the Soviet union. The status quo was not an option. In classic Russian style, 79% of residents voted to become part of Russia despite a 38% turnout.

Meanwhile, the far eastern Ukraine provinces of Donetsk and Luhansk (known collectively as Donbass) had seen pro-Russia unrest, culminating in the occupation of several government buildings. At the time, these buildings formed the net total of land administered by the (internationally unrecognized) Donetsk People's Republic (DPR) and Luhansk People's Republic (LPR), but that was about to change. A series of pro-Russia and pro-Ukraine protests occurred but, as in Crimea the general desire was the maintenance of peace. Ethnically Russian and Ukrainian people have lived peacefully side by side in Donbass for decades.

A steady trickle of troops and equipment reinforcing the pro-Russian DPR and LPR arrived across the border. Despite Russia's official insistence that Ukraine's internal issues had nothing to do with them, these troops were less disciplined than the ones now formally acknowledged to have intervened in Crimea, and numerous cases of GPS-tagged Facebook photos show Russian soldiers "on the wrong side of the border." These incursions were opposed by Ukraine's army, and were localized to a few towns and cities within a few miles of Russia's border.

By July 14, the separatists had gotten hold of Russian-made BUK surface-to-air missiles and wasted no time defending their airspace. Over the next few days, they publicly announced shooting down several Ukraine military An-26 aircraft, including one on July 17. Shortly after it became obvious that July 17's shoot down was actually of MH17, making a bad year worse for Malaysia Airlines.

Ukraine's internal struggles now became an international issue. With the international finger pointed at Russia, a series of spectacular backpedals occurred, during which it was claimed MH17 was shot down by Ukraine-operated fighter jets after being deliberately diverted into the conflict zone by corrupted European air traffic control, presumably to frame Russia. As usual, Russia's line is that all the weapons used by separatists were captured from Ukraine's army. Expert analysis has been unable to support these suggestions, finding instead no shortage of evidence that they had never been purchased or used by Ukraine. Russia's national media is every bit as uncritical and parochial as that of the U.S., however, so the deployment of such crude propaganda is still highly effective.

Through late July, separatists continued to lose ground as their promised full-scale Russian invasion force, massing at the border for months, failed to materialize. By mid-August, Ukraine looked poised to crush the last remnants of the rebels. However, by Aug. 23, reporting on MH17 had died down enough that Russia launched a "humanitarian intervention," rapidly retaking and holding roughly half of the Donbass region.

The humanitarian crisis surrounding the conflict is real enough, however. Much of Donbass will have insufficient food this winter due to economic and agricultural disruptions concordant with fighting all summer. For that reason, fighting since has focused on a number of known supply depots. Many countries keep large supply depots at logistic hubs in case of disaster. Luhansk and Donetsk airports are two such cases. Both large, modern international airports were occupied by Ukraine's army. Both airports have since been utterly destroyed by Russian artillery, though Donetsk's ruins are still defended by a band of fighters dubbed "the cyborgs" for their seemingly invincible, death-proof nature. That said, around 5,000 people, mainly military, have died since the September ceasefire at Donetsk airport and a few other hot spots in the otherwise cooling conflict. Mysteriously, the Organization for Security and Cooperation in Europe (OSCE), which oversees the ceasefire from white SUVs, seems never to be around when the bullets are flying.

Russia's original goal, stoked by a carefully maintained information bubble around key leaders, seems to have been the rapid annexation of Donbass and surrounding oblasts much like Crimea, totaling perhaps a third of Ukraine. Today, it is thought that the goal is to forge a land corridor between Russia and Crimea, either through or around Mariupol. Mariupol, once broadly pro-Russia, is now heavily fortified. It is clear that in this conflict, however, Russia has all the time, money, and weapons in the world. A rapid or decisive victory is unnecessary. Ultimately, Russia may support the reintegration of separatist regions into a new federalized Ukraine with semi-autonomy under a new constitution that would ensure Russia's ongoing influence in Ukraine's domestic politics. This outcome may be even better than wresting away some contentious and now shell-shocked territory.

Throughout the conflict, pro-Ukraine forces have openly requested military support from NATO and/or the EU. In particular, many U.S. commentators have suggested helping to arm Ukraine's army to provide the firepower needed to oppose Russia's artillery. Cooler heads have wisely suggested that doing so would provide material proof that Russia has needed to support its narrative of persecution by NATO, and thus far Western governments have resisted showering Ukraine with weapons. A less fraught suggestion is instead to shower Ukraine's NATO member allies and neighbors such as Bosnia with U.S.-made weapons so they can sell their Russian-made systems (with which the soldiers are already familiar) to Ukraine at a very reasonable price whilst avoiding accusations of direct interference.

In November 2014, the conflict is still very much ongoing. On Nov. 2, the separatist regions held elections. Ukraine stated such elections were in violation of the Minsk protocol, wherein Ukraine obtained independence at the end of the Soviet Union in return for giving up its substantial nuclear arsenal and permitting the Russian navy base in Crimea. On Nov. 7, NATO reported that Russia has deployed nuclear-capable weapons to Crimea. Current estimates place 7,000 Russian troops in Ukraine, and about 50,000 on the internationally recognized border. Through mid-November around 80 military vehicles (tanks, mobile artillery, etc.) have been moving through the separatist regions. It is unclear how the future will play out, or how well the separatist regions will weather the coming winter.

Maps showing occupied territory on August 15 and August 28 (at end of article).

These pictures are intended to bracket the section discussing the post MH17 Russian military surge. They are sourced from https://mspolitics.quora.com/Update-ceasefire-basically-doesnt-exist, but the writer is not the originator. They contain attribution information on the bottom, to website: http://www.rnbo.gov.ua/ This is the Ukraine government National Security/Defence website. Complete list of maps: http://www.rnbo.gov.ua/en/news/?cat=2 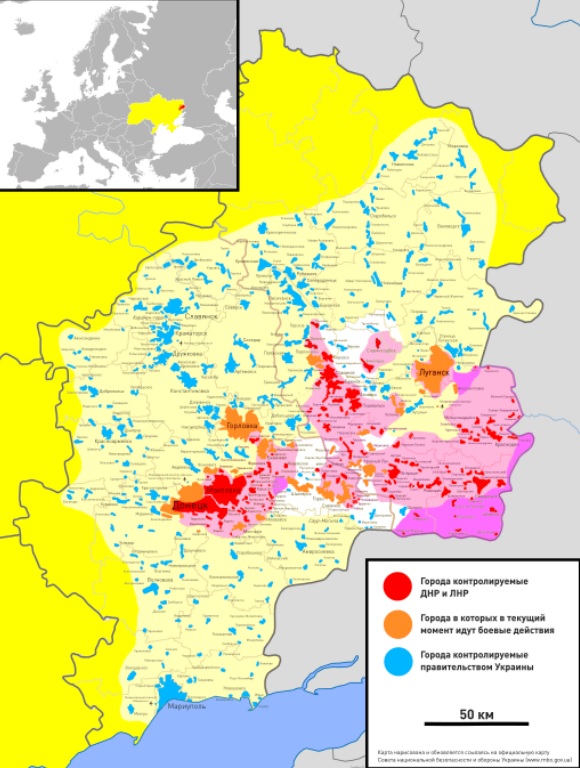 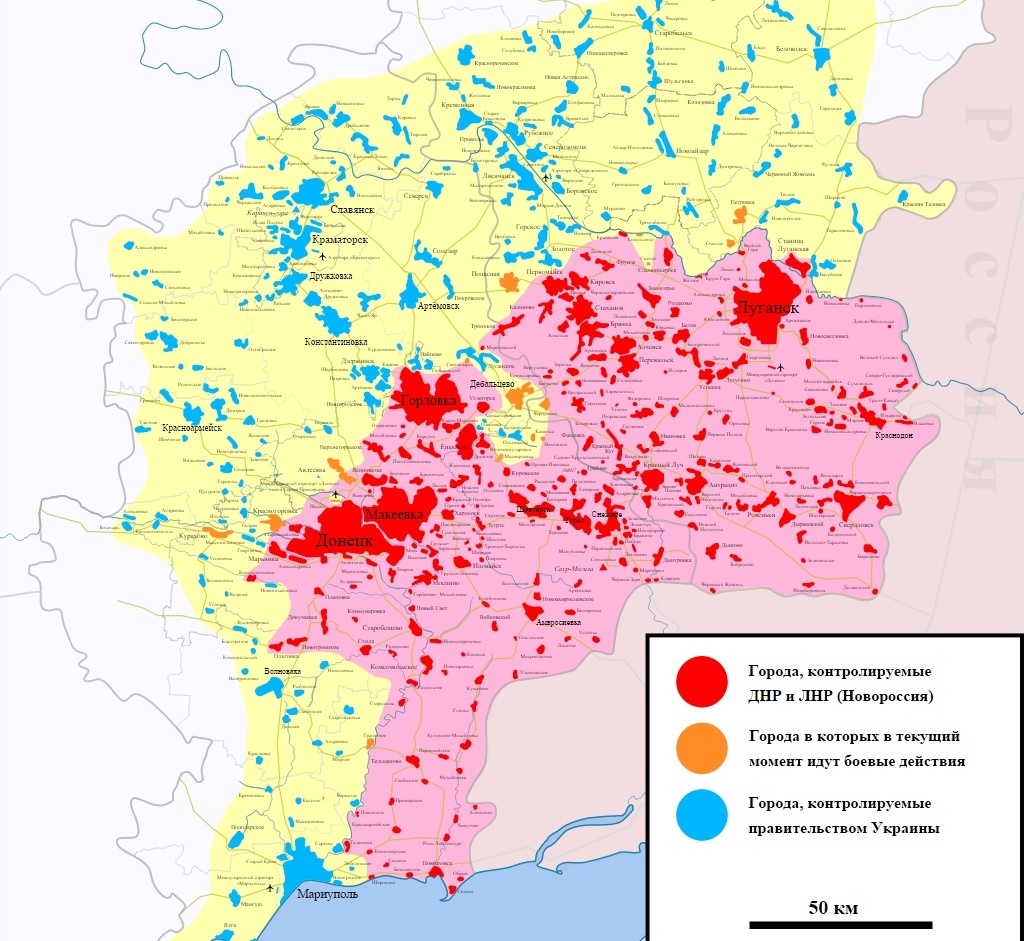 Posted by Casey Handmer at 7:51 PM